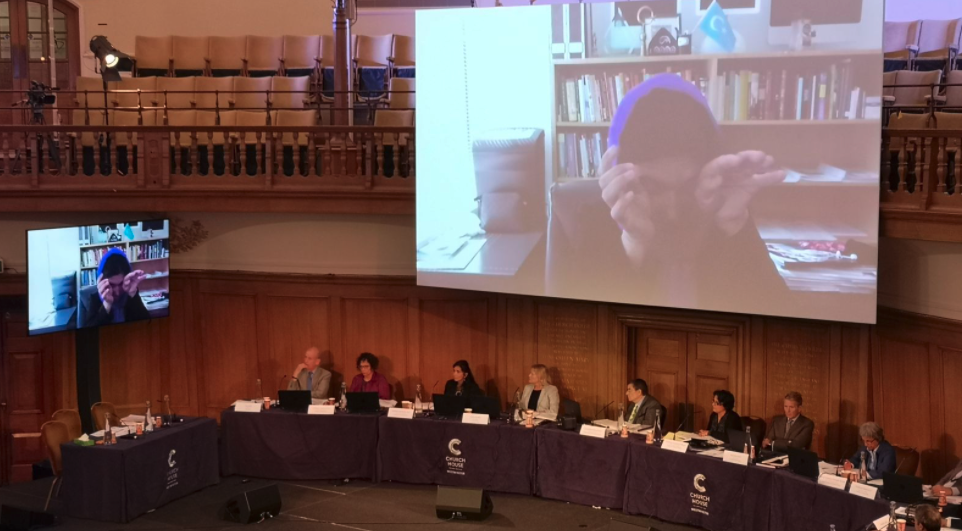 The 42-year-old has been giving evidence to an independent tribunal in London, looking at alleged human rights abuses.

Warning: This article contains descriptions of rape from the beginning.

A Uighur woman was raped with iron bars and electric rods by Chinese police officers at a Xinjiang camp, a tribunal in London has heard.

Tursunay Ziyawudun, who gave evidence via video link and through an interpreter, broke down in tears as she recounted her story.

“It’s very difficult for me to even think about that night. It was just a horrific time, a time when I was dead,” she said.

“That equipment is just horrible. The bleeding was non-stop.”

The 42-year-old also said she was physically raped three times during her detention at an internment camp.

“The horrific thing that happened is not only a simple rape – it is extreme, inhuman torture,” she said.

“They will also kick you, hit you on the wall. They bite your body just like dogs.”

Ms Ziyawudun was giving evidence on the second day of the independent tribunal, which has been set up to assess whether China’s alleged human rights abuses against Uighur people constitute genocide.

“If nobody else will provide it, we will.”

The tribunal does not have the backing of the UK government and has no powers to sanction China, but organisers hope the evidence heard will compel the international community to take action.

“I think there’s a reasonable chance, better than usually with such tribunals,” said Sir Geoffrey, a British barrister who led the prosecution of ex-Serbian president Slobodan Milosevic and has worked with the International Criminal Court.

An estimated one million people, most of them Uighurs – a Muslim ethnic group living largely in the northwest Chinese province of Xinjiang – are thought to have been detained inside “re-education camps” in recent years.

Zumret Dawut, another Uighur woman, told the hearing she was detained in a camp for 62 days and was repeatedly forced to ingest unknown medication.

“It was a white tablet and we had to take it every day,” she said.

“To make sure we had taken it, the camp officials would put gloves on and insert their hands in our mouths to check we had swallowed.” A guard tower and barbed wire fences at a facility in Xinjiang, China. Pic: AP

Ms Dawut, who also spoke via video link and through an interpreter, told the nine-person panel she lost 18kg during her detention and had blood taken every 15 days.

China has consistently denied claims of human rights abuses and says the camps were designed to offer Chinese language lessons and job support, as well as to combat religious extremism.

China experienced a wave of Xinjiang-related terror attacks in 2016.

In April, the UK parliament passed a motion that declared the Uighur people are being subjected to genocide.

The US, Canada and the Netherlands have made similar declarations.

But the British government has always declined to get involved, much to human rights campaigners’ frustration.

“Nobody does genocide-denial better than the UK,” Luke de Pulford, coordinator of the Inter-Parliamentary Alliance on China (IPAC), told Sky News.

“Our policy has been to defer to the international judicial system. That system does not function – China blocks any route to a court.

“So our policy on genocide is inoperable and immoral. In that context, the UK has to be participating in this and taking its conclusions seriously.”

The Foreign Office says the UK’s policy on genocide determination has not stopped it from taking “robust action” and leading “international efforts to hold China to account for its human rights violations in Xianjiang”.

Despite repeated invitations to participate, the Chinese embassy in London has not commented on the hearing, which is due to hold another four-day session in September.

Contacted for comment by Sky News, the embassy questioned the legitimacy of the hearings.

“The so-called ‘Uyghur Tribunal’ is neither legal nor credible. It is just another anti-China farce concocted by a few individuals with the end goal of using Xinjiang to contain China. The Chinese side is firmly opposed to it,” they said.