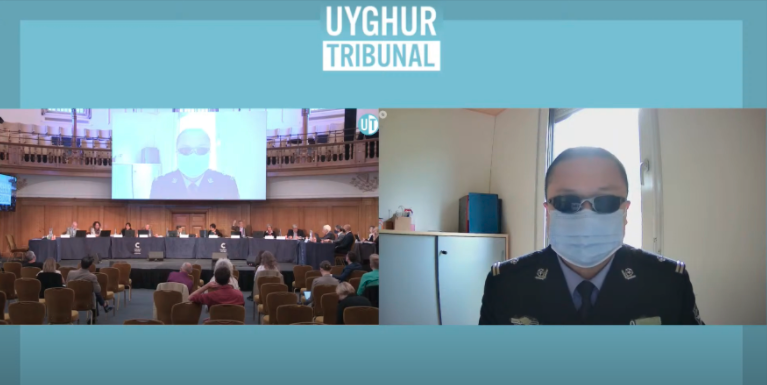 Testimony given at a London tribunal details the tracking, detention and abuse of ethnic minorities in northwest China

A former police officer testified on Monday at the Uyghur Tribunal, an independent inquiry held in London to investigate China’s alleged genocide and crimes against humanity in Xinjiang. He described how Uyghur Muslims were tortured and treated as “less than human” in the northwestern region’s detention centers and prisons.

Wang Leizhan — who spoke under a pseudonym via a video link, with his face covered and voice distorted — said he was one of up to 150,000 police recruits who were sent to the territory to “deal with” the Uyghurs.

Wang spent several months in the region in 2018, tasked with investigating political and religious suspects, including Islamist groups. He recalled that on arrival he was immediately dispatched on arrest rounds. He added that during his short time in Xinjiang 300,000 Uyghurs were detained, including entire villages.

He stated that he did not know about the existence of so-called “re-education” or “ideology transformation” camps until he arrived. Later, he learned of a special committee that ruled which Uyghurs would be forcibly detained. According to Wang, arrests were made because people “were showing their cultural identity, or they were somehow considered to have a different ideology” to that of the Communist Party of China.

Wang outlined how all Uyghur residents of Xinjiang had to provide DNA samples and that officers ordered schools and neighborhood committees to give up the names of people believed to have “problems with their thoughts.”

After an individual’s name was provided to the authorities, Wang explained that “all their activities, including using the telephone and using the internet” were monitored, and that ID cards were used to flag Uyghurs trying to leave the region at train stations and airports. “If you’re a suspect, someone who has this tendency — that you’re against the government — that will be shown on the system,” he said via an interpreter. “Every movement is all completely under surveillance control.”

Among police ranks, Uyghurs were seen and described as “enemies of the people,” “terrorists” and “separatists,” and “were not considered as human beings,” he said.

The tribunal heard allegations that guards tortured prisoners, suffocating them with plastic bags, forcing water into their lungs and electrocuting them.

“They were forced to sign confessions to admit that they are terrorists and also to denounce and provide a list of their relatives and friends as being terrorists,” Wang said in his witness statement.

“I realized it was a kind of unwritten rule that the police have the power to torture prisoners,” he told the panel, explaining that while officers were required to video interrogations of Han Chinese inmates, there was no such obligation for Uyghur prisoners.

Officers themselves were sworn to silence. “Everything conducted was secretive. We were not supposed to disclose any information,” he said. “Many Uyghur police were arrested when they spoke about these facilities over the phone.”

Wang left China in 2020 and is now living in Germany. “My dream was to serve my country and protect people,” he said. “Gradually, from my own experiences with how the system works, I realized that I wasn’t serving the people, I was serving the empire, to protect their power.”

On the tribunal’s final day, the panel heard eight statements from witnesses including Mehmut Tevekkül, 51, a Uyghur who was imprisoned and tortured in Xinjiang before being released in 2010, and Nursiman Abdureshid, 33, a Uyghur woman whose family is detained in Xinjiang’s prisons. Proceedings concluded with new research from Adrian Zenz, a senior fellow in China Studies of the U.S.-based Victims of Communism Memorial Foundation. He told the panel about his peer-reviewed analysis of birth rates in Xinjiang, looking at how China is “optimizing” its ethnic population structure in the region. Ethnic minority birth quotas have been strictly imposed in Xinjiang since 2017. China has been accused of enforcing birth control and sterilization procedures, separating couples and detaining those who exceed their quota.

Zenz set out how birth control policies could stop between 2.6 and 4.5 million births of minorities in southern Xinjiang alone over the next two decades. He went on to state his belief that a shrinking population “is easier to assimilate and indoctrinate.”

The tribunal has no state backing and any judgement it reaches will not be binding. Beijing has also roundly attacked the proceedings. At a press conference in May, foreign ministry spokesperson Zhao Lijian described it as “a special machine producing lies.”

Chaired by human rights barrister Sir Geoffrey Nice, the tribunal was held at the request of the World Uyghur Congress — an international organization of exiled Uyghurs — amid increasing pressure for western countries to investigate whether China’s policies in Xinjiang amount to genocide. The panel and its witnesses will reconvene in September.

Watch: the story of another police officer in Xinjiang, as recounted by his sister: