Hearings in London aim to assess allegations of genocide in China 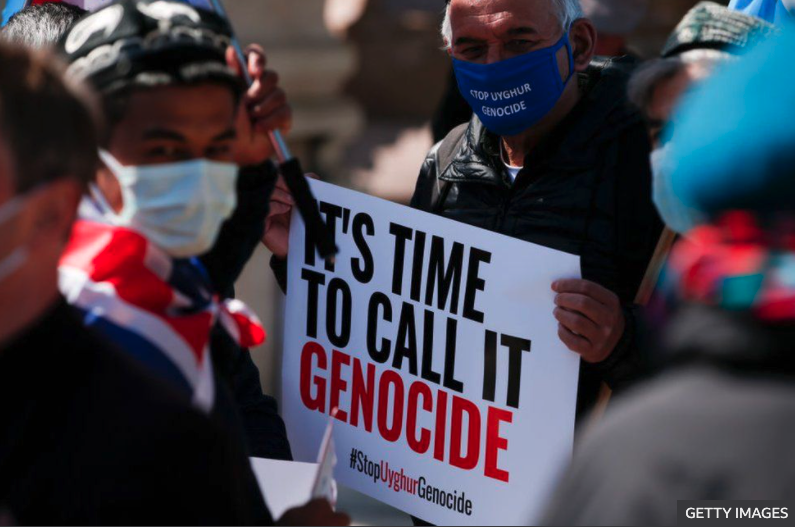 Posted at 11:43h in Press Coverage by benjamin32@fastmail.fm
4 Likes
Share

A series of hearings begins in London on Friday aiming to gather evidence on whether the Chinese government’s alleged human rights abuses in the Xinjiang region constitute a genocide.

An eight-member panel, chaired by the prominent British barrister Sir Geoffrey Nice, will hear from about 30 witnesses over four days of testimony.

The hearings have no government backing and the panel’s conclusions are not binding on ministers, but the organisers say they hope the process will add to the body of evidence around the allegations against China.

The panel consists of academics, lawyers, and a former British diplomat. In selecting its members, the organisers intentionally drew from a mix of disciplines and avoided China experts to avoid a risk of prejudgment, Sir Geoffrey said.

The hearings, branded by organisers as the Uyghur Tribunal, were arranged by the London-based businessman Nick Vetch. Mr Vetch was previously involved with similar hearings in 2019 that examined allegations of organ harvesting in China.

The Chinese state has been accused of crimes against humanity and genocide in Xinjiang, a large region in the country’s northwest which is home to the Uyghurs and other minority Muslim groups.

Experts say that at least a million Uyghurs and other Muslims have been detained in the region and held in extra-judicial camps or sent to prisons. Former detainees and residents of Xinjiang have made allegations of torture, mass surveillance, and forced sterilisation.

China denies that abuses are taking place, and says its network of camps in Xinjiang are for “re-education” and vocational training purposes. Xu Guixiang, the spokesman for the Xinjiang regional government, called the hearings a “total violation of international law and order, a serious desecration of the victims of real genocide, and a serious provocation to the 25 million people of all ethnic groups in Xinjiang”.

A dozen experts have been invited to give evidence at the hearings, including Dr Darren Byler, an anthropologist at the University of Denver, Colorado; Dr Jo Smith Finley, a reader in Chinese Studies at Newcastle University; Nathan Ruser, a researcher at the Australian Strategic Policy Institute; and Adrian Zenz, who has published reports on forced labour and abortion in Xinjiang.

Dolkun Isa, the president of the World Uyghur Congress, will also give evidence. Mr Isa told the BBC that the privately-organised hearings were the only option available for investigating China’s actions in Xinjiang because the two international courts which might otherwise take up a case had no plans to do so.

The International Criminal Court announced in December it would not investigate because China, as a non-member, was outside of its jurisdiction, and the International Court of Justice can only take a case that has been approved by the UN Security Council, over which China has veto power.

Mr Isa, who believes his mother died while in detention in Xinjiang, and who discovered this week that his brother had been sentenced to life in prison there, said he hoped the hearings would force politicians to “pay more attention”.

“And not only pay more attention, but take concrete steps like imposing sanctions. This is the moral obligation of all countries,” he said. Sir Geoffrey Nice QC, who led the prosecution of Slobodan Milosevic, will act as chair of the tribunal

Another witness, the prominent Uyghur scholar and activist Abduweli Ayup, told the BBC the hearings were “a platform to tell our stories”.

Mr Ayup said he would be thinking about his niece Mihray Erkin while he gave evidence. Ms Erkin was a graduate from Shanghai’s Jiao Tong University and Tokyo University and went on to join the staff of Japan’s Nara Institute of Science and Technology. In 2019, she returned to Xinjiang after authorities put pressure on her parents, Mr Ayup said.

She is believed to have died in November, aged 30, in Yanbulak Detention Center in Xinjiang. Reports of her death were confirmed in May by Radio Free Asia.

“If there is a question about my niece I will be happy to answer it. That is the personal side, the suffering,” Mr Ayup said.

The panel will be chaired by Sir Geoffrey Nice, who previously led the prosecution of the former Serbian president, Slobodan Milosevic. Sir Geoffrey told the BBC that the inability or failure of international criminal courts to take up investigating the allegations of genocide had left a “void of information”.

“What we hope to achieve is to provide facts that others may use,” he said. “The tribunal will not go further than that, it will not look outside the crimes it has been asked to investigate, and it will not overreach by making recommendations about what others should or shouldn’t do. It will simply provide facts for others to use.”

The US State Department has previously described China’s actions in Xinjiang as a genocide, and the parliaments of the UK, Canada, Netherlands, and Lithuania have passed resolutions making the same declaration.

Others have argued that genocide is a specific term with legal force that should only be determined by a criminal court.

The case for genocide is based on reports that China is taking steps to erase the culture of the Uyghurs and assimilate or diminish the population through programmes of forced relocation and birth control.

In a report published in April, the US-based charity Human Rights Watch concluded that China was responsible for crimes against humanity in Xinjiang, but stopped short of calling the state’s actions a genocide.