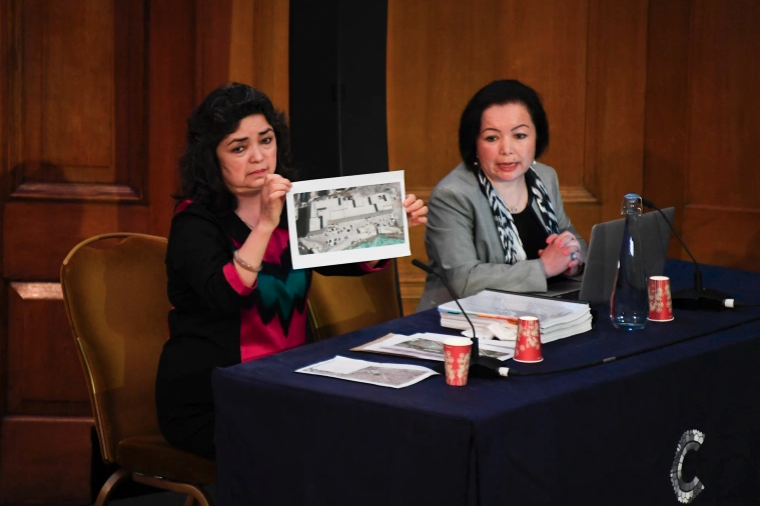 Dozens are giving their accounts to a people’s tribunal in London, which China has dismissed as a ‘clumsy public opinion show’.

A London-based people’s tribunal is investigating whether China’s alleged persecution of its Uighur minority amounts to genocide, with witness testimony detailing mass torture, rape and a range of other abuses.

The “Uyghur Tribunal” has no state backing and any judgement would not be binding on any government, but it has drawn a furious response from Beijing, which dismissed the hearings as a “machine producing lies”.

The first hearings take place over four days, from Friday to Monday, and are expected to draw dozens of witnesses. A second session is expected in September.

The nine United Kingdom-based jurors of the tribunal, including lawyers and human rights experts, intend to publish a report in December on whether China is guilty of genocide.

The first witness to testify on Friday, Qelbinur Sidik – an ethnic Uzbek teacher from Xinjiang’s capital Urumqi, said she was ordered by the Chinese Communist Party bosses to take Mandarin-language classes in two fetid and crowded “re-education” camps, one male and one female, for Uighurs.

The so-called students were made to wear shackles during hours-long classes, she told the tribunal.

“Guards in the camp did not treat the prisoners as human beings. They were treated less than dogs,” Sidik said through an interpreter. “They enjoyed watching them being humiliated and their suffering was for them their joy.”

Female prisoners were allegedly abused when they were taken for interrogation.

“They were not only tortured but also raped, sometimes gang-raped,” Sidik said. “The things that I have witnessed and experienced, I can’t forget.”

Sidik said she was also subjected to forced sterilisation. Organisers hope the process of publicly laying out the evidence of an alleged state-orchestrated campaign of repression against the Uighurs, a largely Muslim ethnic group, in China’s northwest Xinjiang province will compel international action against the country’s authorities [Alberto Pezzali/AP Photo]

Organisers hope the process of publicly laying out the evidence of alleged state-orchestrated repression against the Uighurs will compel international action against the country’s authorities.

According to the United Nations, at least one million Uighurs, a largely Muslim ethnic group, have been detained in the internment camps in China’s northwest Xinjiang province, which borders eight countries including Afghanistan, Pakistan and India.

‘I want my son to be freed’

The tribunal is chaired by prominent human rights lawyer Geoffrey Nice, who led the prosecution of ex-Serbian President Slobodan Milosevic and has worked on several cases brought before the International Criminal Court (ICC).

It was set up at the request of the World Uyghur Congress, an international organisation of exiled Uighurs.

The tribunal’s organisers said Chinese authorities had ignored requests to participate in the hearings.

But counsel for the tribunal said the United States and Australia had offered to provide relevant material, to add to thousands of pages of documentary evidence already compiled.

Critics, including the UK and the US, say Uighurs have been subjected to human rights violations, including arbitrary detention, forced labour, torture, forced sterilisation and family separation. The tribunal is chaired by prominent human rights lawyer Geoffrey Nice, who led the prosecution of ex-Serbian President Slobodan Milosevic and has worked on several cases brought before the ICC [Alberto Pezzali/AP Photo]

Before giving testimony to the tribunal via video link, three Uighurs who fled from China to Turkey described their experiences.

One, named Rozi, said she was forced into an abortion when six and a half months pregnant. Her youngest son was detained in 2015, when he was just 13, and she hopes the tribunal’s work will help lead to his freedom.

“I want my son to be freed as soon as possible,” she said. “I want to see him be set free.”

Another, a former doctor, spoke of draconian birth control policies.

And a third, a former detainee, alleged he was “tortured day and night” by Chinese soldiers while imprisoned in the remote border region.

China denies the allegations of abuse and claims the camps are “re-education” centres.

Officials insist that mass “education and training” is necessary in Xinjiang to fight what they call the “three evil forces of extremism, separatism and terrorism”, and boost economic development there.

In March, the tribunal was among four UK entities and nine individuals sanctioned by Beijing for raising concerns about the treatment of the Uighurs.

“It is not even a real tribunal or special court, but only a special machine producing lies,” foreign ministry spokesman Zhao Lijian said last week. “It was founded by people with ulterior motives and carries no weight or authority. It is just a clumsy public opinion show under the guise of law.”